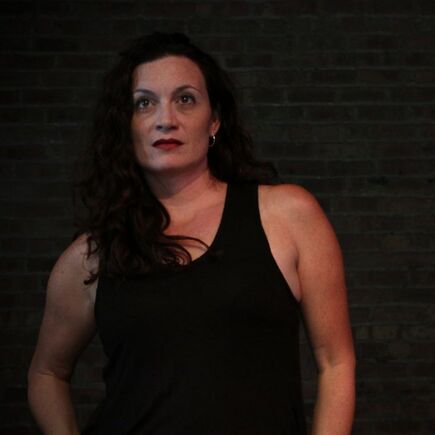 ​Ellyzabeth is a multidisciplinary artist working in the genre of "Tanztheatre," weaving together theatre, dance, film, spoken word, and music. As founder of Chicago Danztheatre Ensemble (CDE), she has dedicated herself to forming partnerships with artists of all genres and generations to create unique, dynamic, engaging, and meaningful ensemble performances. She also teaches and mentors the next generation of performers who, in turn, serve as visiting artists and teachers in schools and community centers through CDE’s Books Alive and Poetry Alive to enhance literacy, numeracy, and arts awareness for thousands of underserved children in the Chicago area, as well as teaching traditional dance, theatre and visual art in the schools. Ellyzabeth studied dance at William Reilly Academy of Ballet and danced with the Springfield Ballet Company before earning a BFA in Performing Arts, with a minor in Broadcast Journalism at Roosevelt University. In 2000 she earned a Master of Arts in Directing and Movement; as her thesis she developed CDE’s techniques for creating multidisciplined, kinesthetic, and socially engaging theatre. She has created and/or collaboratively adapted, directed and choreographed 10 full-length works, including T.S Eliot’s The Wasteland; Ever Your Own; Edgar; The Yellow Wallpaper; This Is Not A Pipe; Bindis and Bruises; and Touch and Mirrors—one-act plays based on work by the Persian poet Rumi. She has also created and choreographed over a dozen concert-length works focused on women’s issues, the female body, suicide, the human condition, and pathways to enlightenment. Ellyzabeth has one very simple goal in life: to change in the world for the better, one person at a time.

Philip has a Bachelor of Arts in Music and Bachelor of Arts and Science in Communication from Millikin University. Phillip has found his ultimate calling to educate, enlighten, and inspire through the power of music. He supports and strongly encourages youth to find their voice within their own community. As a current educator, it has become an honest goal to follow in the steps of one of his greatest mentors, Josephine Lee & Josephine Lee. Bringing change to communities, inspiring youth, and engaging social change, are all attributes to the power and change music brings too many. Gospel Music and Jazz are essential elements of his soul, and that's what you will hear in all aspects of Phillip’s music.

Caleb is originally from Oklahoma, where he studied theatre performance at Oklahoma State University. Caleb moved to Chicago a little over three years ago and has been fortunate enough to have worked with CDE in the summer program for the past two years. He has worked in childcare, youth, after school, and early learning programs for almost 10 years and is thrilled to be able to continue to do so in this capacity in the great city of Chicago.

Keyierra hails from Columbus, OH with a six-year background in teaching dance. She graduated from Columbia College Chicago, earning a Bachelor’s Degree in dance. Keyierra is a versatile mover trained in a range of techniques from ballet, modern, West African, jazz, hip hop (breaking, house) and some capoeira forms. Outside of being a teaching artist, Keyierra works as a freelancer; collaborating on other artist projects, creating her own work and choreographing for different organizations and groups. She also dances with Ayodele Drum and Dance, a Chicago based all-female West African drum and dance company. Being an artist Keyierra has been able to travel, sharing experiences with artist from places like Haiti and Nigeria. Traveling plus collaborating with others has taught Keyierra the importance of sharing experience/knowledge in our communities. She wants to continue sharing those experiences through her work and with children she connects with by teaching dance.

Naomi recently moved back to Chicago from Denver where she was focused on community organizing. She has a passion for the arts and education. Naomi received a bachelor’s degree in interactive and industrial design from Syracuse University. ​

David, a Chicago native, has been acting professionally since 2006. At the University of Chicago, he began to hone his skills and build a repertoire which reignited his love of performing. After college, and also after Peace Corps, David started doing theater and many on-camera projects; his theater credits include Skin for Skin (The Agency Collective Theater), for my brothers...whenever i may find them (Step Up Productions), An Improv Play (InFusion Theatre), A Fool Such As I (eta Creative Arts), The Last Saint on Sugar Hill ( MPAACT Theatre), and Between Legs & Open Ears (Black Ensemble Theater). He has worked with various production companies such as August Jackson Agency, Draft/FCB, Twist, T2 Studios, Back Ally Films, Crossroads Films, One at Optimus, Mothlight productions, Ferderici Video, and Elkhorn Entertainment. And his on-camera IMDB credits include Chicago Med and Chicago PD (NBC Studios LLC), Proven Innocent (21st Century Fox), D.I.N.K’s (Sole Productions), Thanks Mom (Breakwall Pictures LLC), Perceptions and Morning After (Acestroke Productions).

Jordan ​is a Chicago dance artist and teacher. She creates and performs work that tells meaningful stories and addresses socio-political issues. In 2019 she self-curated and produced “On Being Well,” an evening of dance by local choreographers investigating stigmas and structures surrounding mental health in America today. She is very excited to be joining the CDE teaching artist team to bring her passion for dance and learning to Chicago Public Schools. Outside of performance work, Jordan advocates for artists through freelance marketing, communications, administration and video work. She is a staff writer with See Chicago Dance. Jordan received a B.A. in dance and journalism from Loyola University Chicago.

Cari ​is a performer, producer, and teacher around the Chicago area. Along with her work with CDE she is also a performer and teacher with Chicago Improv Productions and an onsite producer with the College Improv Tournament.

Eric has a bachelor’s degree in commercial music from Millikin University. Singing is Eric’s first and primary passion, but dance levels with it. Since graduating Eric has immersed himself in different industries to improve his artistic skills. Eric feels teaching children is such an essential portion of life currently because he understands the importance of their involvement in the future society.

Nathaniel is the Artistic Director of Eclipse Theatre Company, where he has been involved in every Eclipse production since 1999; as a director, actor, designer and producer. He was honored with a Non-Equity Jeff Award for Directing in 2002 for Romulus Linney’s 2, and for Acting in a Supporting Role in 2009 for playing Doug in Rebecca Gilman’s BLUE SURGE. He has also played John in Terrence McNally’s LIPS TOGETHER, TEETH APART. Other recent Chicago credits include Collaboraction Theatre’s FORGOTTEN FUTURE: THE EDUCATION PROJECT at the Flat Iron Building and CRIME SCENE: LET HOPE RISE at Chicago Park District venues all around the city. He has a Bachelor of Science in Theatre from Northwestern University. He has taught theatre at ChiArts, The Chicago Academy for the Arts, Leyden High School, and at Northside College Prep High School, and he currently teaches and directs musicals at A.N. Pritzker Elementary School. Nat lives in Chicago within walking distance of Wrigley Field.